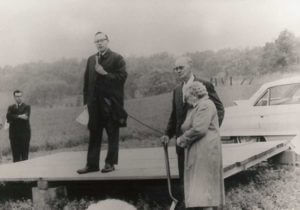 Beginning in 1899, in a much in need of repair factory located in Byrds Creek, William and Carl Schmitt began their cheese making business. From these humble beginnings, the brothers, aged 18 and 21 at the time, grew an industry that by 1928 embraced eighteen cheese factories throughout western Wisconsin and warehouses that assembled twenty million pounds of cheese annually.

The business, known as Schmitt Brothers, was eventually absorbed by Borden Enterprises with offices in Richland Center. William Schmitt came to Richland Center to live in 1837 and built a home on North Central Avenue.

William H. Schmitt passed away in 1962 and when his will was probated there was a large sum of money bequeathed for the building of a retirement center. Planning for this new center began almost immediately. The “Home” was incorporated in 1962 as a non-profit organization and in the same year the first Board of Directors was assembled.

Many had hoped a suitable site could be found in Richland Center itself. Ultimately, no site could be found within the city limits and the decision was made to purchase farm land at the end of Seminary Street from Kevin Norman for the building site for the new “Home”. The Board signed construction contracts totaling $735,000.00 with Kraemer Brothers of Plain, Wisconsin and ground breaking ceremonies were held on September 2, 1963. Mrs. William (Oda) Schmitt, William’s widow, wielded the first shovel of dirt. The initial Open House was held on March 25, 1964, with the week witnessing over fifteen hundred visitors from sixty-five Wisconsin communities and beyond. 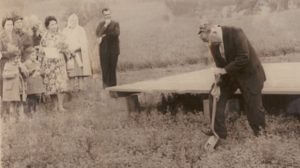 From the onset in 1964, unless special permission was granted, a resident of the home had to be at least 70 years of age. In 1974 that Standard was relaxed to allow persons 65 years of age or older to become residents. By the end of the first 9 months of its existence, the new community numbered 53 residents.

In 1981 it was thought that a larger building could be operated more efficiently and could give care to more elderly persons. Planning for the additions began and construction was started in December, 1981, in the midst of a very cold winter. The new additions, at a cost of approximately $1,000,000, included a two-story wing with resident space for five two-room apartments, two efficiencies, and three single rooms. In addition they increased the Health Center from 22 to 25 beds. Two nurse’s offices, a staff lounge, an examination room, an activity-therapy room, and a conference room to be used by all departments were added. Space was also provided which allowed the gift shop to be relocated.

By July of 1982, the additions, designed by Flad and Associates of Madison and built by Kraemer Brothers, Inc., and a crew of approximately fifty workmen operating on varied schedules, had almost completed the building. The Consecration and Open House were held on October 3, 1982, with retired Bishop Ralph Alton conducting the Consecration service.

Legacy gifts left by Oda Schmitt, Myrene Plopper, and Louise Brewer did much to make it possible to build with little or no additional burden on the existing residents.  Memorials and gifts from fifteen residents were earmarked for the new furniture. Of the $1,000,000 cost of the addition, only $390,000 had to be borrowed from the Farmers and Merchants Bank of Richland Center.

In 1987 plans were announced for another new addition at Schmitt Woodland Hills.  This was to be the new CBRF Assisted Living wing, referred to as Westview. The addition included a 30-bed, one story facility with a basement. In addition to the 30-bed assisted living unit the building included a beauty shop, dining room, activity room, physical therapy room and a crafts room.

In 2014 planning and fund raising began for still another addition. This was to be the new 50-bed Skilled Nursing Unit featuring all private rooms with private baths. Ground was broken on April 21st and Kraemer Brothers of Plain Wisconsin began construction. The existing Skilled Nursing Unit was converted to assisted living space allowing the rooms to become all private rooms. The Therapy Department, Wellness Room and Beauty Shop also moved into new locations on the Main Street, connecting the new and old building. On August 22, 2015 we celebrated the Grand Opening of the new addition and renovations plus our 50th anniversary.

Share on FacebookShare on TwitterShare on Linked InShare by Email

Schmitt Woodland Hills is the only continuum of care facility in Richland Center.